On November 10, 1851, Messrs. B. G. Snow, A. A. Sturges, and Luther H. Gulick, with their wives, embarked at Boston for Micronesia, an immense number of islands stretching from three degrees south to twenty degrees north of the equator. Arriving in Honolulu, the group chartered a schooner, and it was decided that Rev. Ephraim Clark, secretary of the Hawaiian Missionary Society, and Rev. James Kekela should accompany them to assist in establishing the mission and to report the condition of affairs to the Hawaiian churches. Two Hawaiian missionaries, Opunui and Kaaikaula, and their wives were added. The new mission party sailed July 15, 1852, on the ship "Caroline", en route to Micronesia, where Christianization efforts would take root and endure for the next half-century.

The attention of the missionaries turned to three disparate cultural areas of Micronesia: the Carolines, the Marshalls, and the Gilberts [Kiribati]. Kusaie [Kosrae] and Ponape [Pohnpei] in the Carolines were the first to be occupied, mainly because of their convenient location and healthful climate. On August 21, 1852, the "Caroline" arrived at Kusaie, or Strong's Island, where a prominent chief gave his consent for the mission to be established and promised to provide land, a house, and necessary supplies. Messrs. Snow and Opunui and their wives began their work in this isolated place. Two weeks later the "Caroline" anchored at Ponape, or Ascension Island, where Messrs. Sturges, Gulick, Kaaikaula, and their wives, with the approval of the local chief, began their mission work.

From the Carolines, the Micronesian Mission branched out to the Marshall Islands. In 1857, George Pierson, an American Board missionary to Micronesia, opened the first Protestant mission on the island of Ebon in the Marshalls.

In 1857, the ship "Morning Star" arrived at Honolulu with Mr. and Mrs. Hiram Bingham, Jr., as passengers. Built with monies raised by Sunday School children, the "Morning Star" departed Honolulu for Apaiang, Gilbert Islands, a distance of over 2,000 miles, where the Binghams were discharged to set up a mission station. In 1864, Mr. Bingham's poor health forced the couple to return to Hawaii. Two other American missionaries, Horace Taylor and Alfred Walkup, and several Native _Hawaiian ministers, were associated prominently with the Gilbert Islands mission. Nineteen Hawaiian families in all went to the Gilberts - more than the combined number who traveled to the Marquesas, Marshalls, and Carolines.

The Micronesian Mission was funded by the Hawaiian Evangelical Society (H.E.A.) and by the American Board of Commissioners for Foreign Mission_s, located in Boston. The Hawaiian Mission Children's Society also contributed financial support to the Mission in its early years of operation.

The extensive, well-organized files of correspondence in the collection of the Hawaiian Mission Children's Society Library serve to document the Micronesian Mission. The Native Hawaiian missionaries regularly reported the conditions of their stations to the H. E. A., whose headquarters were located in Honolulu, Hawaii. Written in the Hawaiian language, these reports adhere to the formal report format taught by the American missionaries to the Native Hawaiian missionaries being prepared for missionary work. As might be expected, countless pages of correspondence are devoted to the expression of religious ideology. However, these letters, reports, and journals also contain keen observations and personal thoughts on a wide range of subjects, as well as creative prose and poetry, including songs of lamentation for the deceased, name songs honoring individuals, and poetry composed as catharsis in times of .personal crisis or grief.

The HMCS collection also yields reports of the missionary vessel "Morning Star", which traveled yearly to the various island stations, delivering supplies, mail, and news of the outside world to the missionary families. 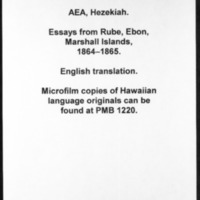 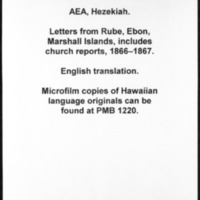 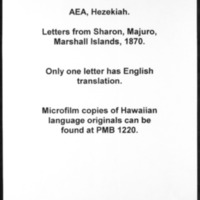 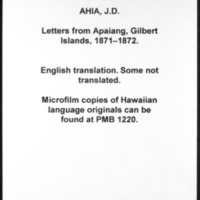 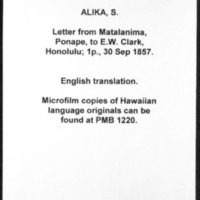 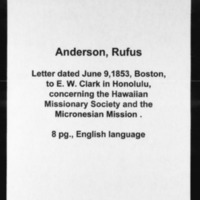 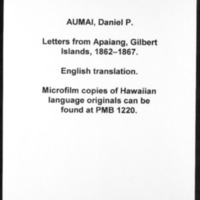 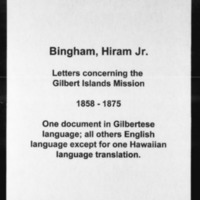 Bingham, Hiram Jr. Letters concerning the Gilbert Islands Mission. One document in Gilbertese language; all others English language except for one Hawaiian language translation. 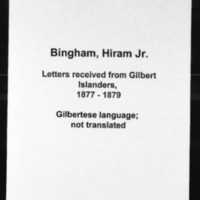