There are three names on Kanui’s memorial stone: Kanui, his birth name, meaning, The Big or Great One; William, a name given him by an American ship’s captain when he sailed as crew, and Tennooe, an anglicization of Kanui, used by his American friends.

Kanui was an adventurous teenager. In the year 1809, when he was about 13 years old, he and his brother left the islands as ship’s crew. After touching at ports in the American northwest, they arrived at their ship’s homeport of Boston, Massachusetts. A return to the islands was made impossible when the east coast of America was blockaded by the British during the War of 1812    The brothers took on farm work and then signed on as crew to several privateer ships licensed to confuse, attack, and raid British ships.

At the end of the war, the brothers sought to sign onto a ship returning to Hawaii. Having found nothing between Boston and New York, they went to Providence, Rhode Island. In Providence,  Kanui’s brother took ill and died. Kanui, alone for the first time in a foreign land, took up work near Yale College. Here Kanui met Henry ʻŌpūkahaʻia, a Hawaiian who had begun studying at the Cornwall Foreign Mission School, begun for foreign missionary students in the year 1817 by the American Board of Commissioners for Foreign Missions (ABCFM). ʻŌpūkahaʻia dreamed of taking his knowledge of the Christian god to his homeland, but died in February 1818, with his fellow Hawaiians at his deathbed – Kanui included. Kanui was a member of the pioneer company of ABCFM missionaries to Hawaiʻi that left on October 23, 1819, from Boston. On the six-month voyage from Boston to Hawaii, he and two fellow Hawaiians gave the mission band their first lessons in the Hawaiian language and culture.

After the nearly six-month journey brought ship Thaddeus carrying the mission to the islands, Kanui was chosen with Asa and Lucy Thurston, John Honoliʻi, and Dr. and Mrs. Holman to set up a mission on Hawaiʻi Island, while the rest of the party continued to Oʻahu.

Kanui became friends with the King and joined in his drinking and games, which was frowned upon by the mission to the point that Kanui was excommunicated from the mission church. He did not repent and not long after sailed for the American continent.   The teachings of the church did not leave him, however, and one day, working in a forest cutting wood, he heard a voice calling for him to repent and return home. He returned to Hawaiʻi, returned to the church, and began an English school in Palolo Valley, Oʻahu. It was a spiritual success but difficult and expensive to run. In 1848, he decided to go to California and find his fortune in the California goldfields. He left the islands with a letter from the office of foreign affairs of Kamehameha III, giving him a list of directions for Hawaiian natives then in California, encouraging them to be upright in their behavior and to return to the islands when they had made their fortunes. Kanui himself was successful and made a fortune of six thousand dollars, which he put in the Page, Bacon, and Company bank. The bank failed and his fortune was lost in a single day.

Following this setback, Kanui tried his hand at being a bootblack, a barber, a tavern keeper, and lastly as an iron and rag merchant. Friends asked Kamehameha III to find him a way home to the islands, which was done, and Kanui enjoyed a short few months on Oahu before his death in 1864. As much as fortune tossed him around, Kanui found, lost, and found again his faith and then kept it, ending his life in humble poverty but convinced that God had led him home.

In the life and death of Kanui, God’s Providence and Grace were wonderfully manifested. This stone was erected by J.H. [James Hunnewell] of Boston & S.C.D. [Samuel Chenery Damon] of Honolulu.

The Story Behind the Headstone: The Life of William Kanui. Douglas Warne. Hawaiian Journal of History Volume 43 (2009) 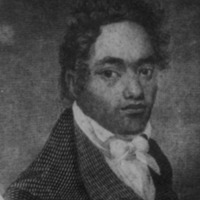