Ms. Alexander is best known as the first Bahá’i of Hawai`i and the missioner who carried the faith to Japan and eastern Asia.
She was the youngest of five children born to William DeWitt Alexander* and Abigail Charlotte (Baldwin) Alexander and granddaughter of two mission families - Reverend William and Mary Ann Alexander and Reverend Dr. Dwight and Charlotte Baldwin. Born in Honolulu, she attended Oahu College (now Punahou School) and furthered her studies in education at the University of California at Berkeley and at Oberlin College. She worked at Punahou school assisting in the kindergarten, then as a second-grade teacher from 1898 to 1900.
Due to ill health, she toured North America and Europe in 1900. “It was in far off Rome,” Miss Alexander wrote, that she received the “Light of this New Day.” She learned from Mrs. Charlotte Dixon about Bahá’u’lláh, prophet-founder of the Bahá’i faith, as a new messenger from God. After three meetings with her, Agnes wrote she could not sleep, “an overwhelming realization came to me, which was neither a dream nor vision, that Christ had come on earth.” She embraced the Bahá’i cause that morning, November 26, 1900. `Abdu’l-Bahá, son of Bahá’u’lláh and head of the faith, wrote Ms. Alexander requesting her to return to Hawaii to spread the New Gospel.
As Bahá’i believe God to be the author of all the world’s major religions, Ms. Alexander regarded her Bahá’i missionary work as an extension of her grandparents’ efforts. Returning to Honolulu, she lived with her parents and sister Mary, however the new religion upset her parents. She wrote: “Among my relatives a rumor had spread that I had taken up some strange belief. I had to show through my life, and not be words, the great happiness that had come into my life.” She continued her Bahá’i teaching quietly, patiently and person-to-person, eventually gathering together a small group of local believers.
The first public opposition to Ms. Alexander’s new beliefs came from her father. In November 1909, two itinerant Bahá’i teachers stopped in Honolulu. Ms. Alexander persuaded her father to let them deliver their first address on the lanai of the Alexander home in Makiki. Afterwards Professor Alexander wrote a newspaper editorial critical of the faith.
After her parents’ deaths in 1913, Ms. Alexander sailed to America and received a letter from `Abdu’l-Bahá directing her to travel to Japan to introduce the faith. For twenty-three years she labored to spread the Bahá’i faith in Japan and eastern Asia, including Korea and China. She supervised the translation and publication of Bahá’u’lláh and the New Era into Japanese and assisted in the translation of that work into Japanese Braille as well.
During visits home to Hawaii, Ms. Alexander introduced Bahá’i teachings on Maui, Kauai, and Hawaiʻ Island. She initiated a Bahá’i children’s class in 1927 and broadcast in 1933 over the radio.
Ms. Alexander earned many distinctions for her work with the faith, and her longevity enabled Ms. Alexander to see the results of her work when, in 1964 the first National Spiritual Assembly of the Bahá’is of the Hawaiian Islands was formed.
Ms. Alexander’s seventy years’ service to her beloved faith is unparalleled among the Bahá’is of the Western world. Today Bahá’is from around the world visit this site to honor this extraordinary woman of Hawaii. As one believer has said, “It is not possible to convey to anyone who did not know her the strength of character possessed by Agnes—her extraordinary courage, her complete selflessness, the supreme degree of renunciation apparent in all her actions, and her unshakeable faith. She was a willing and loving thrall of the cause, and in her bondage, she was as free as the ‘divine bird’ `Abdu’l-Bahá had asked her to be.”
*Ms. Alexander’s father, William DeWitt Alexander, also buried here, was born on the Mission Houses site and after serving as President of Oahu College, became surveyor-general (1871-1901) of the kingdom as well as a recognized scholar and author. 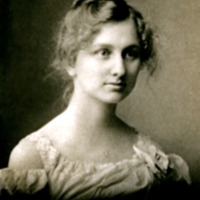