Maria Patton submitted herself to become a candidate for the missionaries on October 15, 1926, believing she would save Native Americans. Instead, she found herself on the Parthian sailing to the Sandwich Islands. Maria became an exception to the rule as she did not have a husband when she set sail on her mission. Maria kept a journal from 1825 to 1859, that detailed her biggest life experiences and challenges.

Maria started her journal in 1825 when she was still in Salisbury, Pennsylvania and not yet apart of the mission. She would detail almost everyday of her life, focusing most of her attention on Sunday’s as she would talk about the sermon she heard or her time at church. She would include the mundane aspects of everyday life to her exciting journey to the Sandwich Islands. In her everyday life, Maria took care of her eight children and would entertain visiting guests with a hot cup of tea. Sea captains to royalty to fellow missionaries were always welcomed in the home of the Chamberlains. Since Maria and Levi were close to the royalty, they were updated on political affairs of the government. She wrote how Madam Boki prepared for war as she did not want to give up Oahu. In the end, other chiefs were able to calm down Madam Boki and major conflict was avoided. Maria would end her journal in 1859, 34 years after first starting in 1825. 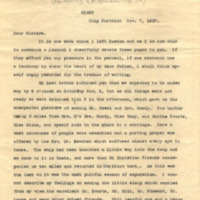